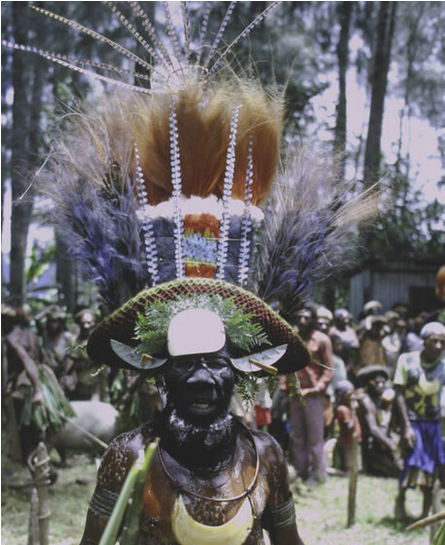 Moka is a term known to anthropologists as a ritualized system of gift exchange among societies in the Mount Hagen region of Papua New Guinea. Among tribes such as the Kawelka, a man can gain status and become a 'Big Man' if he organizes a ceremonial exchange similar to a potlatch: the more he gives, the greater his prestige.

Moka exchanges are embedded in a system of reciprocity, and “moka” itself refers to the increment in the size of the gift - it is the extra. The social status of a Big Man is the result of his ability to amass gifts from relatives and friends so he can repay his debt to another Big Man and give back more than he has received. In New Guinea, Moka gifts consist primarily of pigs, pearl shells, cassowary birds, and money.

In the 1974 documentary Ongka's Big Moka, Ongka makes three attempts before he succeeds in staging his moka. His gift consists of a truck, 600 pigs, $10,000, 8 cows, and 12 cassowaries. Onka’s Big Moka is also the name of the debut album released by the British band Toploader in 1999 and featured the chart-topping song “Dancing in the Moonlight.”

Having an account with us will allow you to check out faster in the future, store multiple addresses, view and track your orders in your account, and more.

You have no items in your shopping cart